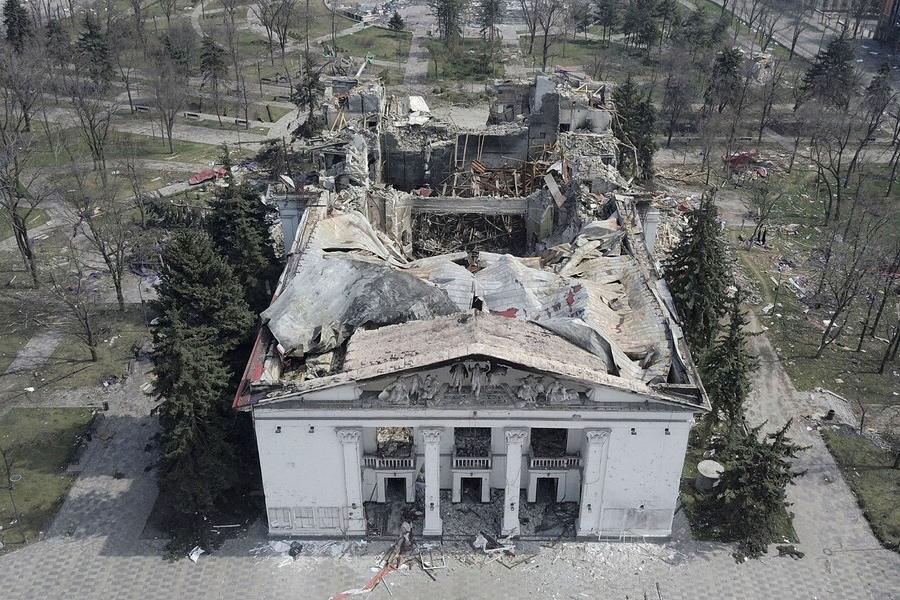 Full-time propagandists, who call themselves “journalists”, write texts about future crimes of the Russian Federation against Ukraine, and when the Russian servicemen commit them, the propagandists blame Ukraine

The crime has been proven

The Organization for Security and Co-operation in Europe (OSCE) has recognized the attack on the Mariupol Drama Theatre as a “flagrant violation” of international humanitarian law. The OSCE report states that “those people, who ordered or carried out the attack, committed a war crime.”

James Goe, a professor of international security at King’s College London, who was an expert witness at the UN International Criminal Tribunal for the former Yugoslavia, said that documenting events in the theatre was crucial for establishing a pattern of crimes against humanity in Ukraine.” Professor Gow also has no doubt that the destruction of the theatre in Mariupol was carried out on purpose.

An investigation by the Associated Press (AP) has found evidence that a deadly attack inside and outside the building led to about 600 deaths. The investigation also refutes claims by the Russian Defense Ministry that the theatre had served as a Ukrainian military base and had been blown up from the inside by “militants” of the Azov Regiment.

Witnesses interviewed by the Associated Press, who were outside the Drama Theatre, claim that they heard the sounds of approaching fighter jets from the Sea of ​​Azov before the explosion. Ammunition experts involved in the AP investigation believe that the scale of the destruction of the building indicates that a 500-kilogram bomb was dropped from a military aircraft. The bombing of the theatre took place at about 10 a.m. directly on the stage and in the field kitchen, which was located next to the building.

Photo of the place, where the airstrike was carried out, from the article of the investigation of the Associated Press news agency

How propagandists prepared the crime

Let’s look at the role of the Russian neo-Nazi propagandist Dmitry Steshin, who calls himself a “journalist”, in the destruction of the Mariupol Theatre carried out by the Russian Federation. There are legends about this “journalist” and his partner Oleksandr Kotz: Where Steshin and Kotz appear, there is always blood, death, and destruction.

Photo of an armed “journalist” and propagandist Steshin

Screenshot of the message from the Telegram-channel of propagandist Steshin

Propagandist Steshin has been actively spreading misinformation and calls for the genocide of Ukrainians in his Telegram-channel “Russkiy Tarantas” and newspaper “Komsomolskaya Pravda” since the beginning of the aggression of the Russian Federation against Ukraine.

Thus, on March 12, 2022, Steshin spread an allegedly anonymous “warning” about the preparation of a terrorist attack to discredit Russia in his Telegram-channel. The screenshot made by Steshin is saved for the future tribunal as evidence if he deletes it.

The message states that the Ukrainian authorities intend to carry out two provocations with numerous civilian casualties to discredit the Russian Federation in the eyes of the international community.

The idea and chronology of special services of the Russian Federation for organizing a deliberate terrorist act and the choice of targets described in the text of propagandist Steshin can be found on the official Youtube-channel of the Azov Regiment. The fact that Russian intelligence monitors the information space to gather intelligence from open sources will not surprise anyone. This is how all the world’s secret services work, including the Russian ones. Subsequently, these data was used by the Russians in planning a military and information operation.

In particular, on March 10, 2022, the official Youtube-channel of the Azov Regiment published a video about the organization of the largest bomb shelter in the building of the Mariupol Drama Theatre, where more than 1,000 civilians had been hiding from the shelling carried out by the Armed Forces of the Russian Federation.

Screenshot from the video “More than 100 Turkish citizens are in occupied by Russian military city – Mariupol”.

Four days before the bombing of the theatre on March 12, 2022, a story appeared on the official Youtube channel of the Azov Regiment, which reported that more than 100 Turkish citizens were hiding in the Mariupol Mosque.

Screenshot of the message from the Telegram-channel of propagandist Steshin

On March 16, 2022, after the end of a military operation (terrorist attack) in an air strike on the theatre, an article by propagandist Steshin appeared on the website of “Komsomolskaya Pravda”, emphasizing his warning of March 12, 2022 about the alleged provocation of Ukraine.