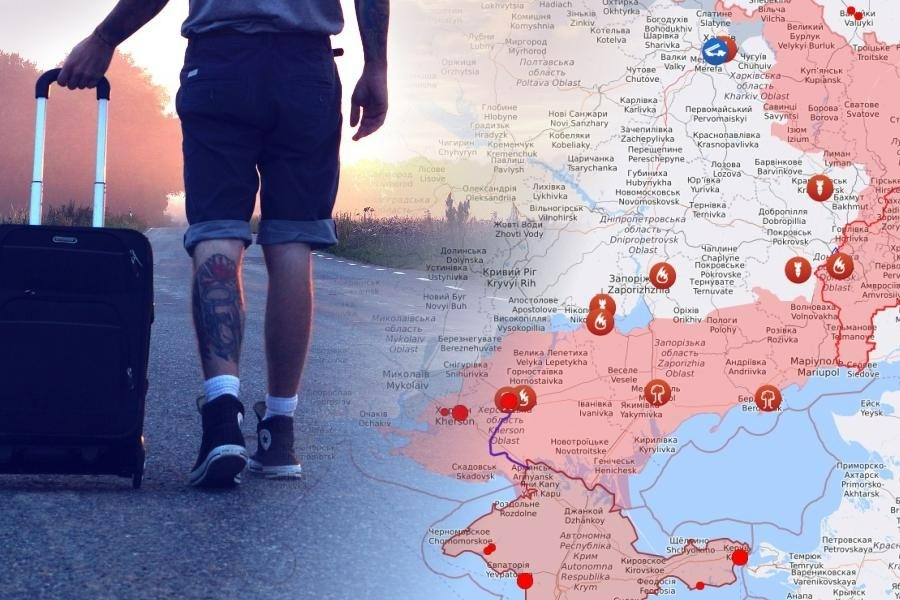 The Russian authorities subscribe to terrorist tactics and are interested in the maximum number of civilian deaths. We collected important information about escape the occupied territories.

To begin with, let’s understand why to evacuate. First of all, there is no and cannot be any future in the occupied territories. Secondly, Russia uses the local population for its own purposes.

Civilians for Moscow perform two functions: mass and resource. In the first case, it is profitable for the Kremlin to keep locals as hostages, because they serve as human shields for the Russians. The enemy benefits from the deaths of civilians on the occupied territories because it reduces the popularity of the Ukrainian Armed Forces and mobilizes the Russian electorate.

For example, when the Russians need to discredit Western arms supplies, Moscow begins shelling the same Donetsk “with hail”, declaring that the shots are fired by Western weapons. At the same time the Armed Forces cannot go on the offensive, because the Russians often equip fire positions in residential areas.

Russians also need civilians as a resource that serves their army: from conditional communal workers to mobilized soldiers. Moscow creates a social crisis in the occupied territories in order to force locals to work for it, and over time tightens the screws by installing passports, payment in rubles and the Russian “legal field”. In this way the occupation is being slowly “legalized”.

Only evacuation can prevent these processes. This facilitates combat operations for the Armed Forces, saves the lives of the local population, and in return requires the Russian Federation to attract more resources from its own side.

What you need to know about evacuation

To begin with, it is necessary to understand that the Russians most often block evacuation to the territory of free Ukraine. Therefore, the same south people can relatively “easy” leave through the Crimea, and Kharkiv or the east through the Rostov and Belgorod regions, respectively. All occupied territories are served by bus services. It is important that leaving the Russian Federation is not an offense or a crime.

Importantly, in the case of going directly to Ukraine, in particular in the south through Vasylivka (Zaporizhia region), the Russians arrange large-scale checks through roadblocks. Therefore, you will have to wait in line, which may stretch to the bottom, because the Russians deliberately delay this process and do not provide “green corridors”.

Before starting the evacuation, be sure to change the phone, because the Russians can check even the files that have been deleted from the device. It should be noted that the Center of National Resistance previously prepared instructions on how to behave in case of detention.

It is important regarding money: it is possible to exchange hryvnias for rubles or dollars on the territory of the Russian Federation. The only thing is that the rate will be determined by the Russian bank and it will not correspond to the market rate.

In general, the Russians deliberately complicate the process of escaping from the “open-air prison”, so there is no need to wait for a high-quality organization of the process. However, this is a better way out of the situation, because the more people leave, the greater the chances that soon everyone will return home after the liberation of the city of the Armed Forces.

Finally, Russia deliberately promotes a false thesis about “peaceful life” and stability on the occupied territories. However, Moscow not only cannot ensure peace and prosperity, but also has an interest in the absence of all this. The whole plan of the Kremlin is to simulate the adjustment of life for propaganda to the domestic audience and to transfer the responsibility for this war to Ukraine.

Remember that not a single territory occupied by Russia: from Transnistria to Crimea, received stability and prosperity. Therefore, your departure will save your life and increase the chances of returning to the de-occupied house as soon as possible.

previous
The magic of numbers. How the occupiers manipulate "public opinion polls" and why they should be ignored
next
In Melitopol the invaders threaten to send to the army those who do not want to study at fake universities