National Resistance Center has gathered a list of the main points of Russian propaganda that they fed to their own population for “legalizing” the war that they started.

The goal of Russian propaganda is to serve the Kremlin’s war of aggression. It is designed to create a parallel reality for Russians, giving the war a “liberating spirit” that adds to its popularity among Russian citizens. They spread the same delusional ideas in the temporarily occupied territories.

We will be reviewing key narratives of Russian propaganda regarding the temporarily occupied territories every week: Informed means prepared.

“Return to a peaceful life”

It should be noted right away that all Russian propaganda avoids cause-and-effect relationships. For example, Moscow accuses the whole world of “Russophobia”, forgetting to specify that the sanctions and negative attitude towards Russians are the result of the Kremlin’s aggressive actions. And at the temporarily occupied territories, the propagandists mostly talk about the “return to a peaceful life” without saying who ruined the peace. 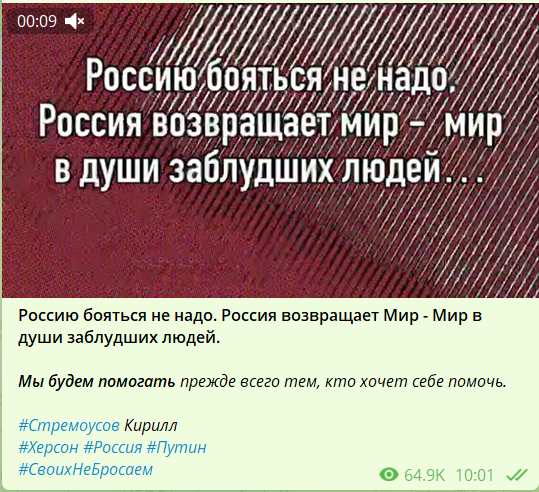 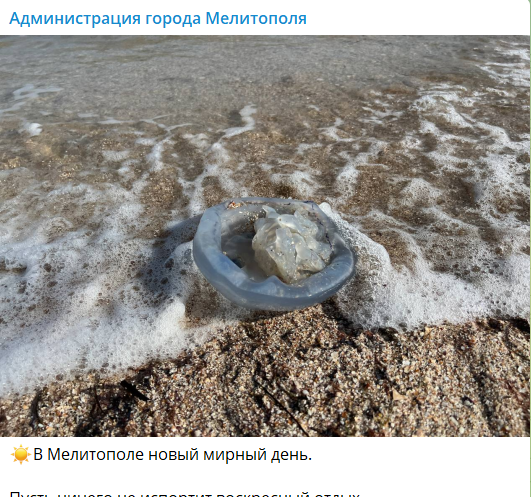 We note that the last “peaceful day” in Melitopol was February 23. After that, the city was occupied, and now the Russians are placing their ammunition in the city putting the population in danger. Cars of collaborators explode in the city from time to time, while heavy battles range in the vicinity of Melitopol. You just can’t call all this a “peaceful life”. A similar situation regarding the “return of peace” is in Kherson and other temporarily occupied territories.

Another emphasis of Moscow is the crowds of supporters. Russians actively post photos from various events to show support on the occupied territories. However, it is not difficult to guess that the photo is a mask. Here is a photo of how Melitopol “celebrates” the day of the flag of the enemy. 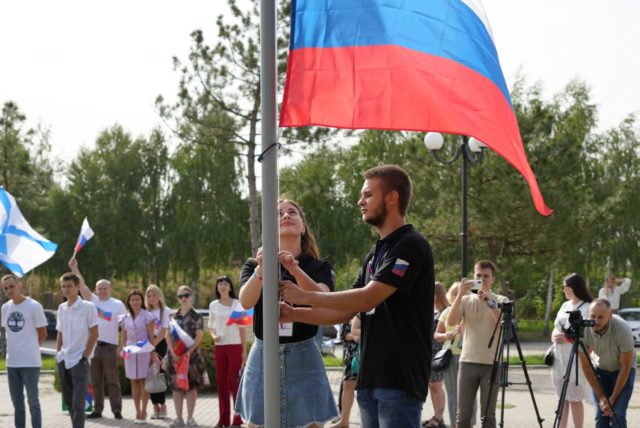 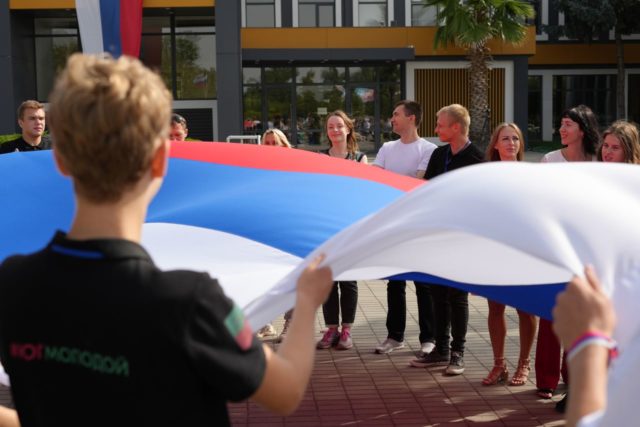 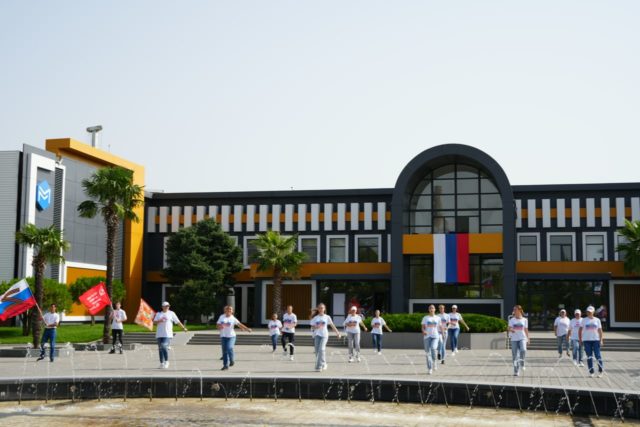 In Kherson, the public festivities were so “well-attended” that the collaborators decided not even to take photos. Instead, they showed a motor race, which consisted of several dozen cars, and it is not difficult to guess whose cars these were.

The whole celebration was about distributing T-shirts and flags and the performance of collaborators. Compare this with rallies against the occupation in Melitopol and Kherson, the two largest cities under occupation. 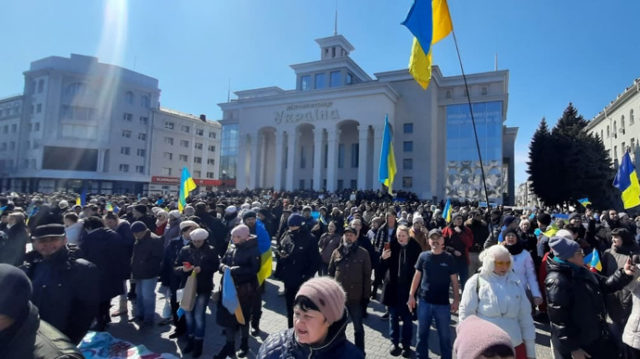 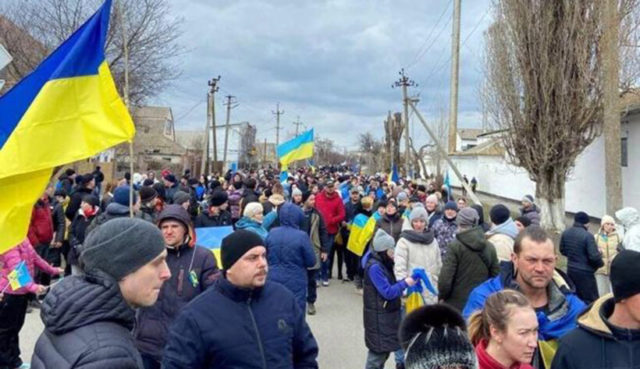 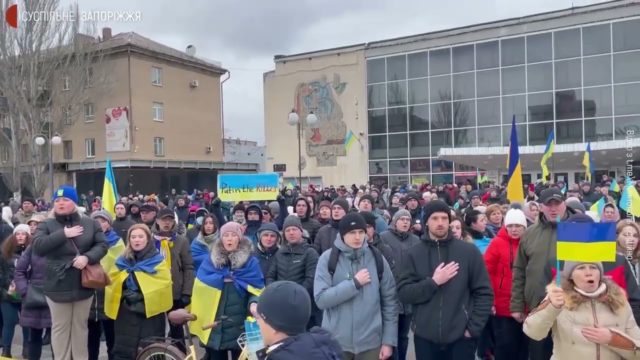 At the same time, rallies against the occupation were under the muzzles of tanks and with risk to life. The invaders repressed many organizers. On the contrary, the occupiers were encouraging the “celebration” of the Russian rag-flag day.

The Russians actively continue preparing the “referendum,” which in itself is a part of propaganda, and we have already described it in detail before. However, the theses in which Russian propaganda openly manipulates facts in its “campaign” are interesting. 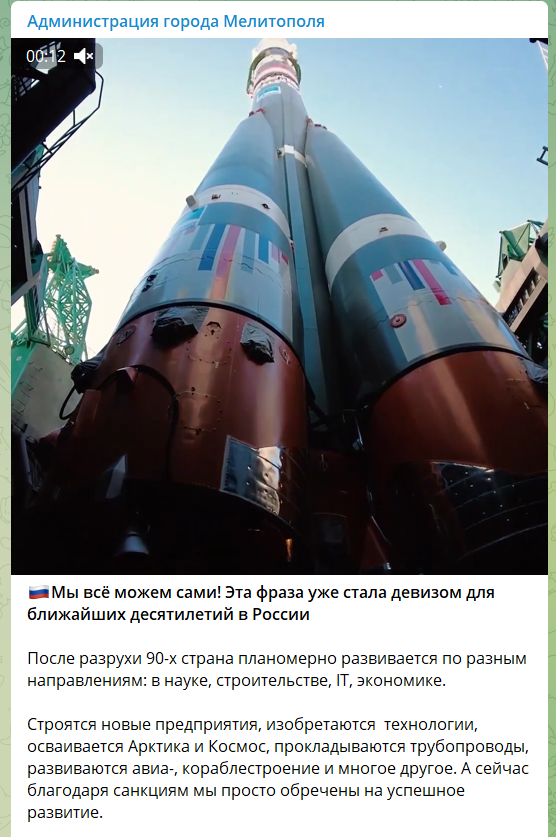 We will not even comment on the famous Russian technologies and successes in space, science and construction over the past 20 years. However, an interesting fact is that the occupiers are actively promoting the narrative that they are doomed to success thanks to the sanctions.

They were spreading the same idea back in 2014 when the first sanctions hit Moscow. Yet, today, 8 years later, it is a fact that the Russian import substitution program failed. They still haven’t mastered electronics and are completely dependent on foreign-made equipment.

Another narrative is that Ukraine is a poor country that is a raw-material appendage of the West that has a large public debt. However, to begin with: the national debt of the Russian Federation is $472 billion compared to Ukraine’s debt of $92 billion. The occupiers forget about this.

They also forget to say that the economy of the Russian Federation is completely dependent on exporting raw materials, while their main importers are in the EU. As for poverty, 21 million people live below the poverty line in the Russian Federation, according to the 2021official statistics. Currently, the situation is worse.

The entire narrative about Kyiv’s crimes is negated by the fact that Kyiv did not commit all these “Crimes” until February 24. That is, it is difficult to accuse Ukraine of genocide of its own population, which lived peacefully there before the Russian invasion.

And here, too, Russian propaganda invents stories. In particular, the story of World War II veteran Ivan Shevchenko, whose decorations were allegedly destroyed in 2014 and now restored by the Ministry of Defense of the Russian Federation, is actively spreading on the temporarily occupied territories. 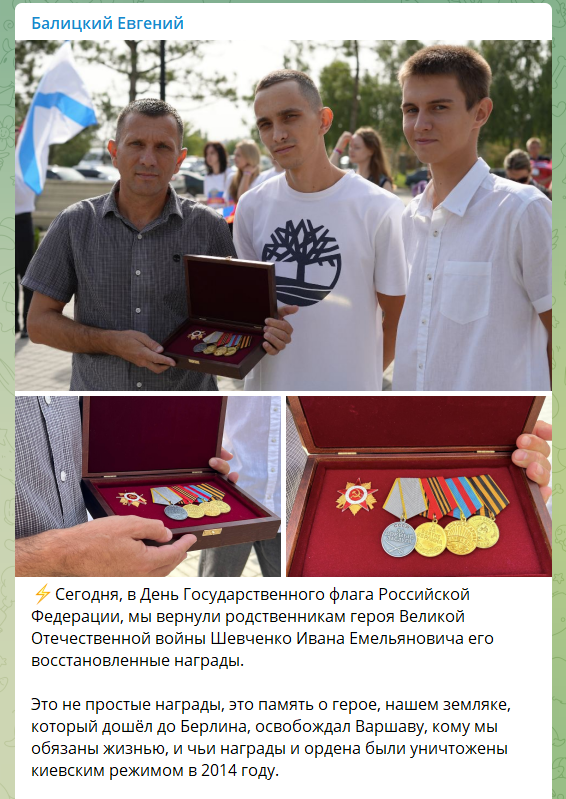 Until 2022, this story was not known anywhere, although if this had really happened, Russian propaganda would have been the first to spread it to the world. At the same time, World War II decorations in Ukraine do not fall under the law on de-Communization, and insulting these decorations is a criminal offense.

Well, one cannot ignore the show that the Russians staged in Enerhodar before the IAEA visit. So, Russian propaganda told about the mythical landing of the Armed Forces of Ukraine and subsequently defeated by heroic Russian troops. However, the footage doesn’t even show the combat, just Russian helicopters bombing residential areas.

The Russians are deliberately shelling Enerhodar, repeating the scenario with Donetsk, in order to show the “ambiguity” of the situation. At the same time, the Armed Forces of Ukraine that are armed with high-precision weapons – unlike the Russians – are randomly shelling a city with a nuclear power plant for some reason, despite targeting Kherson or Melitopol.

In fact, Enerhodar is under fire from the Russians, because the Kremlin is arranging nuclear blackmail of the EU. At the same time, it is trying to discredit arms supplies to Ukraine. That is why Russian propaganda constantly declares that the shelling is being carried out by NATO weapons. At the same time, the wording “peaceful city” is intended to give a more emotional meaning. Although it was the Russians who made this city not peaceful when they occupied it and brought military equipment into the residential quarters.

The Center of National Resistance will continue to inform you about the dangerous points of Russian propaganda in the occupied territories.

previous
The Ukrainian guerillas liquidate collaborators and disrupts enemy's plans for the referendum, - a review from temporarily occupied territories
next
A Ukrainian partisan in Tokmak blew himself up together with two occupiers