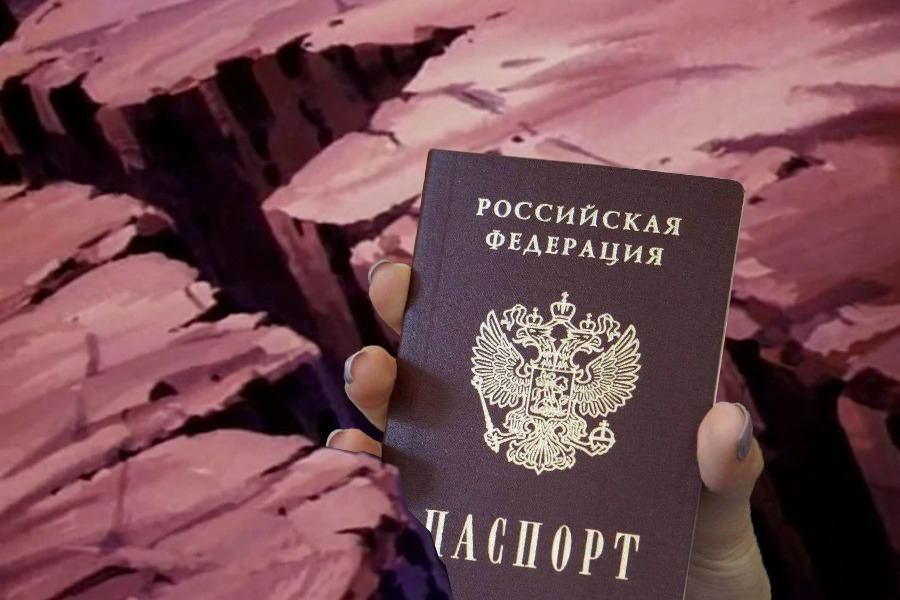 Russian propaganda always equates its country with “high culture”, scientific achievements of the last century, and endless wars. However, it rarely talks about the real standard of living in the Russian Federation. The National Resistance Center decided to fill this information gap.

Currently, the enemy is actively trying to conduct passporting in the temporarily occupied territories of Ukraine. However, its pace is slow, even though the Russians force them to take this waste paper under various pretexts. It is necessary for: receiving social assistance (bribery), paying salaries to state employees, changing the compulsory state car plates, and so on.

We have already written about the risks of such passporting. For example, obtaining an enemy passport transfers a person to the Russian jurisdiction, where you can receive a prison term for a post on social networks. It is not possible to exchange prisoners in this case, because you are a citizen of the Russian Federation. You also can receive a summons to the army while such mobilization is already being carried out by the enemy on TOT.

At the same time, Russian propaganda paints endless prospects for passport holders. Well, let’s talk about the privileges of Russian citizenship in numbers.

Let’s start with a simple one – the ranking of passports (The Henley Passport Index). It is designed to allow the owner to travel without visas or with ease of crossing the border. Here, the red wastepaper is in 50th place (Ukrainian is in 35th).

It should be noted that after the EU cancels the simplified procedure for issuing visas, and possibly the ban on obtaining visas altogether, the Russian passport will drop even lower, and its owners will have even more limited travel geography.

At the same time, the Kremlin does not hide the fact that the prospect of an “iron curtain” for ordinary Russians is perfectly fine with them.

The idea of ​​freedom is completely absent in the Russian Federation. Moscow is building a closed system where citizens will have no rights and freedoms because this prevents the Kremlin elites from holding power. Russia has law enforcement officers to prevent prisoners from rioting. According to the indicator of the number of police officers per civilian population, the Russian Federation is the first in the world.

There are 195 Russians per police officer. For comparison, in Ukraine, this figure is 280 Ukrainians, in the USA 480, and in Finland 736 civilians. Russia is a typical police state, which is inherent in fascism.

The reason is totalitarianism and censorship. It can be stated that there is no civil society in the Russian Federation – an integral attribute of a developed country. This is an eloquent assessment of “Russian culture” and the messages that this culture carries to the masses.

In the UN rating, Russia is still in the honorable 39th place in the education rating. However, the rating consists of the level of education of the population and the number of people with higher education. That is, in general, this is a rating of the availability of education, not it’s quality.

But if we talk about the quality of Russian education, then not a single Russian university is in the top 100 universities in the world. There is one university in the top 200, but the majority of those admitted to the evaluation are not in the top 500. This is all you need to know about the state of education, and with it, science in the “great state”.

It should be noted that the majority of exchange study programs are no longer available for Russians, so the holder of a Russian passport either accepts a certificate from a Russian university or none at all. At the same time, the sanctions extend to the transfer of technologies, which means that all Russian scientific centers, and with them the students of Russian universities, are deprived of the opportunity to participate in global research using modern equipment.

Therefore, the rating of 2022 does not predict anything for Russian education except further degradation and, as a consequence, a drop in world ratings.

The level of Russian healthcare is also not something that Moscow can be proud of. That is why its leaders choose treatment abroad. Russia is traditionally in the top 10 in terms of mortality. In terms of the level of healthcare, the Russian Federation ranks 70th in the world (according to The Lancet magazine as of 2020), but again, restrictions on trade are already leading to a shortage of medical drugs and equipment, because the Russian pharmaceutical industry is unable to meet the needs of its own population.

The Russian economy is not competitive in the world and is a typical commodity model, where the main indicators depend on the volume of sales of energy resources. That is why the Kremlin created a police state without rights and freedoms, to deprive society of the mechanism to push the current elites away from the feeder. 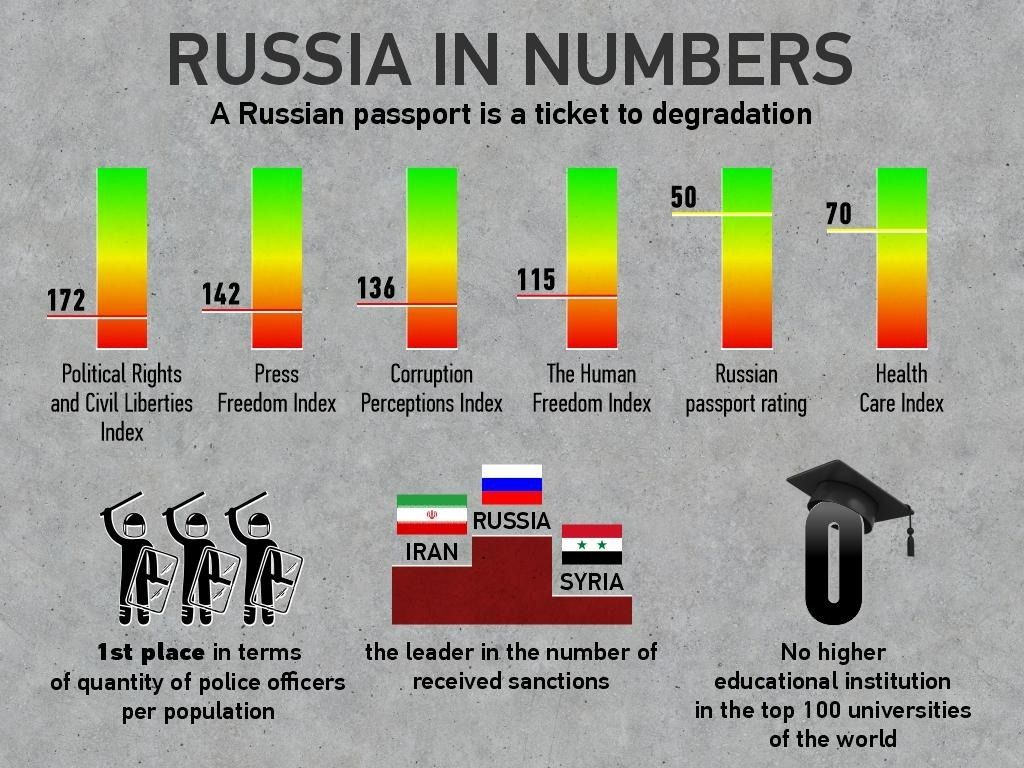 Russia is a corrupt country that ranks 136th in the corruption perception index and a country that, due to the policies of its leaders, is deprived of free trade with the developed world, because it has the largest number of sanctions among all other countries in the world.

All this has a negative impact on the labor market. Russian aggression and sanctions have led to the fact that every seventh Russian already lives below the poverty line (21 million people or 14.3% of the total population), which is 69% more than at the end of last year.

If unemployment in Russia currently reaches 4-5%, then by the end of the year this indicator is expected to double to 9-10%, which will lead to oversaturation of the labor market, and therefore to a decrease in average wages. At the same time, inflation in the Russian Federation already reaches 15%.

Only one figure is important for the economy of the Russian Federation – the price of energy resources. At the moment, the Russian economy is showing a decline, so in July a drop in GDP was recorded by 4.3%, and in general, since the beginning of the year, the drop is 1.1%. However, it is worth noting here that the trend is negative and the decline of the economy increases every month against its growth in January-March.

An embargo on oil and gas by the EU, the main exporter of Russian oil and gas, will come into effect in December. Thus, the decline of the economy will not only continue but also accelerate. The fall was provoked by the Kremlin’s policy.

We went through the basic things, which are the main marker of whether the country is able to develop, and none of them showed positive signs for the Russian Federation. As we can see, Moscow is unable to provide its citizens with quality education or medicine.
There is no reason to believe that Russia is capable of developing any industries in the near future, except for the raw materials industry, because there is no foundation for this. Limited access to modern technologies, trade with the developed world, and the main sales market also does not play in favor of the Kremlin.

There is only propaganda about import substitution, which has not happened in 8 years, and the force of coercion from the occupiers. Therefore, the Center of National Resistance once again urges not to voluntarily take Russian passports, because Russian citizenship is the citizenship of a doomed country without a future.

previous
The occupiers began to issue residence permits to Russians who were brought to Melitopol
next
In Melitopol, explosions were heard near the houses of the referendum organizers