This week, Russia started holding “referendums” to “legalize” its aggressive policy. The main supplier of lies was the leader of the occupiers – Putin, we have already analyzed his speech in detail in a separate material. Today we will talk about the lies of his minions.

It is not surprising that while preparing the “referendum” in an urgent manner, almost all telegram channels of the occupiers had one topic for conversation – mass support from the locals. All the initiatives of the occupiers are implemented according to the will of the “local residents” because this is one of the ingredients of creating an “occupation with a human face”.

The Russian occupation has a simple recipe:

It was this week that the Russians played “national love”, where people prefer to join the Russian Federation and get rid of the “Kyiv regime”.

The will of local residents

Russians always shift the responsibility for their actions to the locals, because in this model they are “liberators” and not invaders. The story of “one of the schools” in the Kherson region is illustrative, where in an unnamed village, the unnamed principal asked the Russian military to remove the “ATO museum” and instead make a “Museum of Russian Glory”. 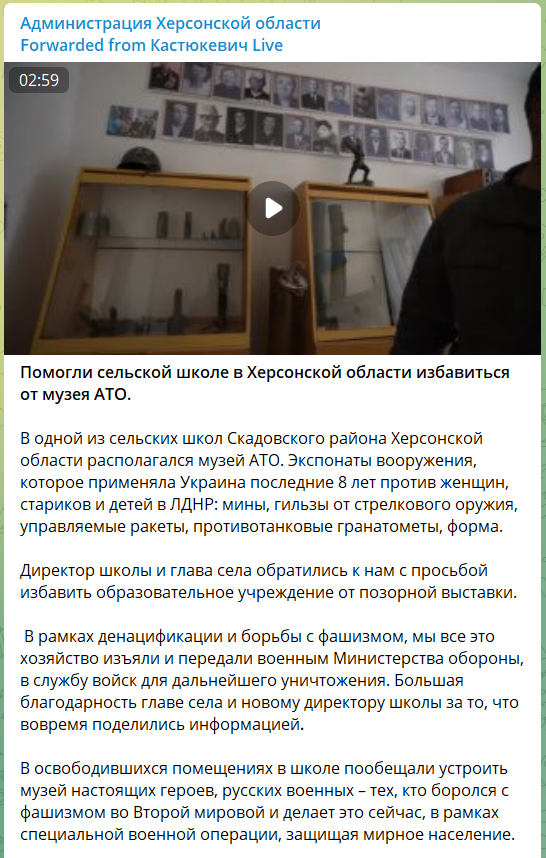 We helped a rural school in Kherson region to get rid of the museum of ATO. In the vacated premises at the school we promised to arrange a museum of real heroes, Russian military

That is, in fact, the Russians broke into the school and destroyed the Ukrainian museum. However, this is presented as a request from the locals. But the main show with the appeal was arranged in the Zaporizhzhia region. 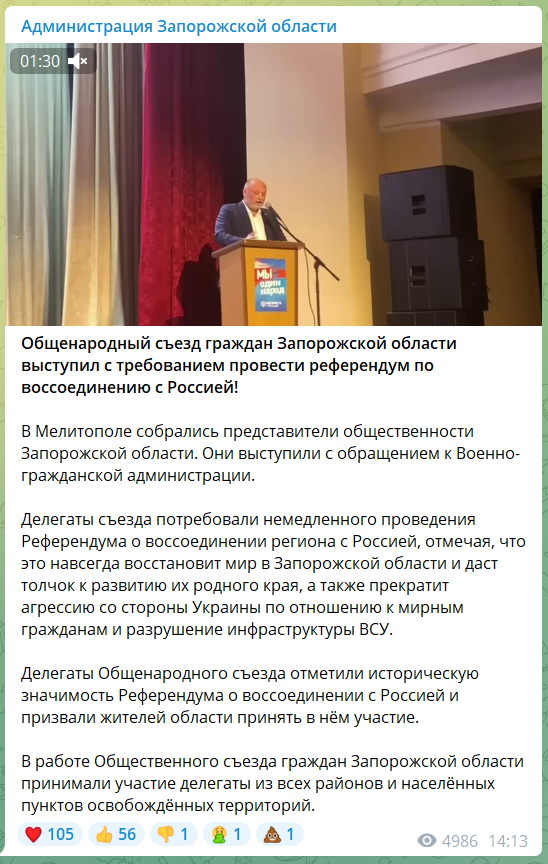 On September 20, “representatives of the public” gathered in Melitopol and asked the occupation administration to contact the Kremlin about holding a “referendum.” The so-called members of the public gathered without prior announcements, which you will not find on the net.

However, they gathered at the same time with similar decisions of the “DPR”, “LPR” and the Kherson region. A coincidence that is possible only in movies or in the Kremlin scenarios of occupation. 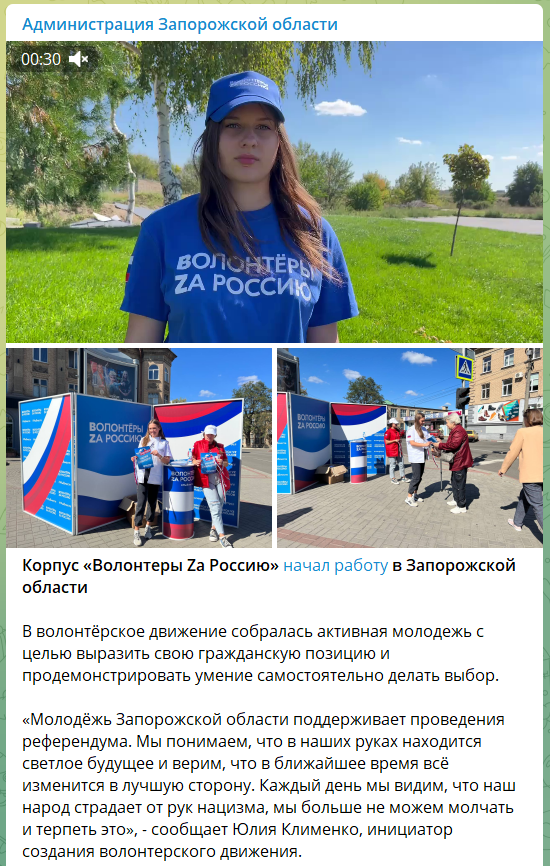 Youth of the Zaporizhzhia region support holding the referendum. 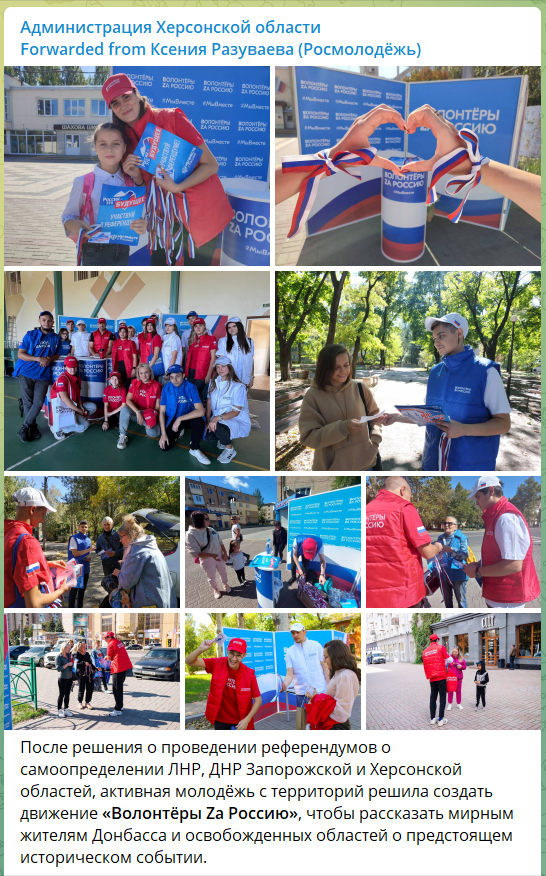 How to distinguish a real public initiative from a performance? That’s right, in the stage everyone has the same pre-printed merch. As a matter of fact, we have “volunteers” who come from the Russian Federation, intersperse with local collaborators, distribute waste paper and participate in other propaganda actions.

Sometimes Russians simply pass off other Russian cities as TOT.

Kherson bulletin: That’s how locals see off a column of Russian military personnel who are departing to the zone of Special Military Operation

Here, for example, the meeting of the occupiers in Novosibirsk became the “send-off” of Russian soldiers to the front line in Kherson.

The secret of voting

The “referendum” that the Russians are holding on TOT can hardly even be called a farce. Armed people go around the houses and collect “checkmarks” under the barrel of machine guns. Similarly, you can approach a tent on the street, where again your choice will be fixed under the muzzle of machine guns.

However, the main collaborator of Melitopol, Halyna Danilchenko, calls it “the secret of voting”. 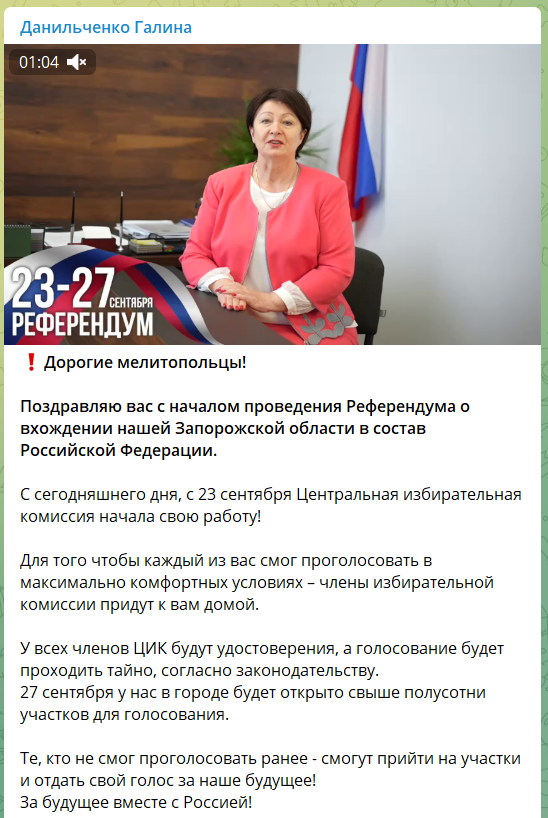 Dear citizens of Melitopol, I congratulate you on the start of the referendum on the entry of our Zaporizhia region into the Russian Federation. Voting will be secret as required by the law.

The “referendum” itself takes place for 5 days, and only on the last day will the polling stations in the city work. Why? Because no one will come to them, but the Russians will say that the reason is that supposedly everyone already voted in their homes earlier. The occupiers couldn’t even draw a turnout, that’s why they staged this circus.

For years, Russia has been instilling in the population the idea of ​​its “developed economy” and the decline of Ukraine. Now, being in the grip of their illusions, propagandists are talking about the improvement and prospects of the regions after the annexation.

So, the Russians prepared a propaganda film in which the famous “economist”, and in fact an actor of cheap TV series, Ivan Okhlobystin talks about the “destroyed industry”. But before the arrival of the Russians, the industrial index of the Zaporizhzhia region showed a growth of +5.7%, and the agrarian complex +14%. 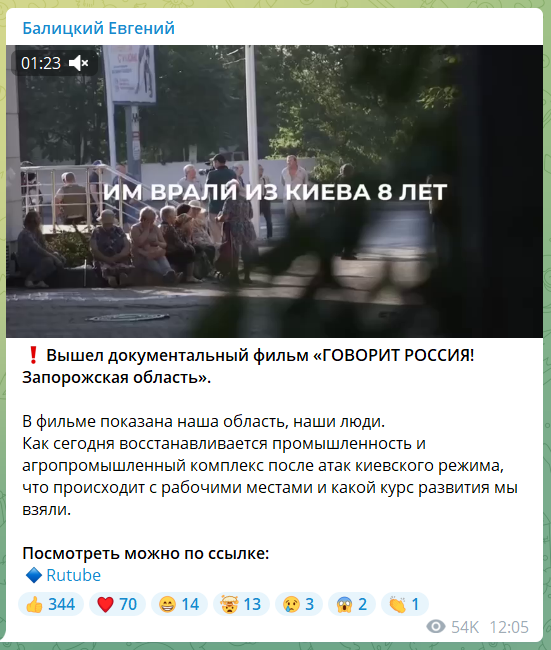 In general, for comparison: in January, the average salary in the Zaporizhzhia region was UAH 16.8 thousand. And in Saratov [Russia] 13.7 thousand hryvnias, and in Crimea 12 thousand hryvnias. Of course, there are regions in the Russian Federation where salaries are higher than in Melitopol. However, Russia is a centralized country and never cares about the standard of living on the periphery. Okhlobystin will not say that.

In general, Russian propaganda uses the general phrases “restoration”, “decline”, etc. That is, he speaks in slogans. Russians do not appeal with facts and figures, because their economy is in decline and there are no reasons for growth.

Russians do not neglect frank cynicism. In particular, the propagandists promise affordable housing for everyone in the Luhansk region, which is a blatant mockery of the region, which the Russians bombed and wiped entire cities from the face of the earth (Severodonetsk, Lysychansk, and others).

When Russia comes to LPR, there will be housing affordable to everyone!

Usually in such sections we talk about how the Russians attribute Nazism to Ukraine, which looks absurd. However, this time we will show what real Nazism looks like. Russian propaganda is not ashamed to be proud of the “occupation”. In one of the propaganda videos, Russians openly rejoice at the increase in the territory of the Russian Federation and the “decrease” of the territory of Ukraine. 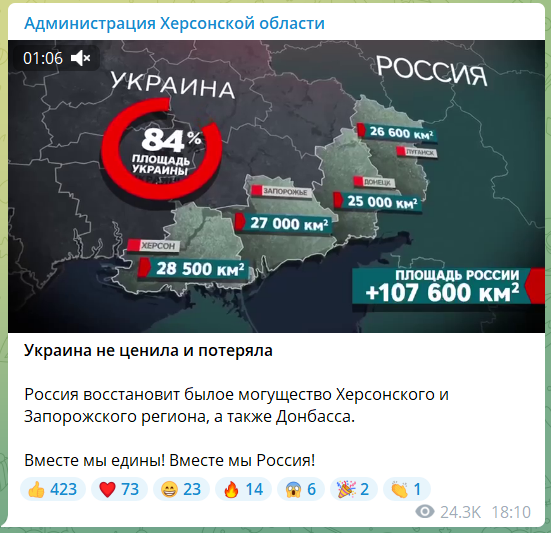 This is the real motive for the invasion – the territory. Russia is a small country with a large territory, and the only thing that makes its inhabitants proud is the size of the country.

Also, the Russians do not forget about nuclear blackmail. The same people who accuse Ukraine of shelling the Zaporizhia nuclear power plant brag about nuclear weapons and the fact that they can use them.

Well, what about the height of the lowliness of the Russians. Instructions of the intelligence group “Rusych”, which they distribute to their fighters. In it, neo-Nazis (this is the ideology of a group officially subordinate to the Ministry of Defense of the Russian Federation) advise killing Ukrainian prisoners of war and torturing them before doing so. And then sell the coordinates of the grave to relatives. 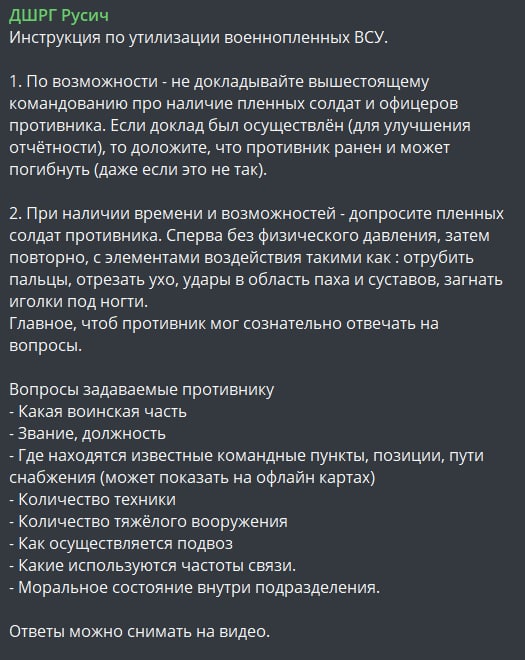 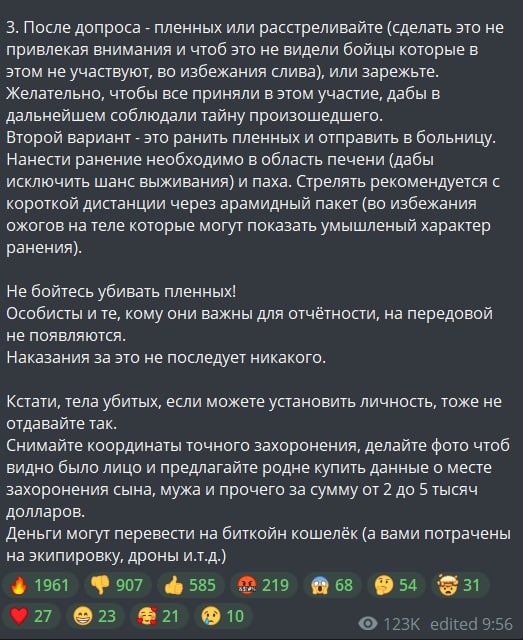 Instructions for the disposal of prisoners of war of the Armed Forces of Ukraine.

The main thing is to ensure that the enemy could answer questions in conscious.

What to ask the enemy

– Morale within the unit.

Answers can be videotaped.

The second option is to wound the prisoners and send them to the hospital. It is necessary to inflict a wound in the area of ​​the liver (in order to minimize the chances for the POW to survive) and groin. It is recommended to shoot from a short distance through an aramid package (in order to avoid burns on the body that can show the intentional nature of the injury).

Don’t be afraid to kill the prisoners!

Counterintelligence officers and those to whom they are important for statistics do not appear on the front lines.

There will be no punishment for this.

By the way, if you can identify the bodies of killed in action enemies, don’t give them away for free.

Take the coordinates of the exact burial place, take a photo so that the face can be seen and offer the relatives to buy information about the place of burial of their son, husband and other details for an amount of $2000 to $5000.

Money can be transferred to a Bitcoin wallet (and you can spent it on equipment, drones, etc.)

Ukraine’s Resistance Center calls to ignore the referendum and evacuate from the temporarily occupied territories if possible. Expect the next review of enemy propaganda on October 2.